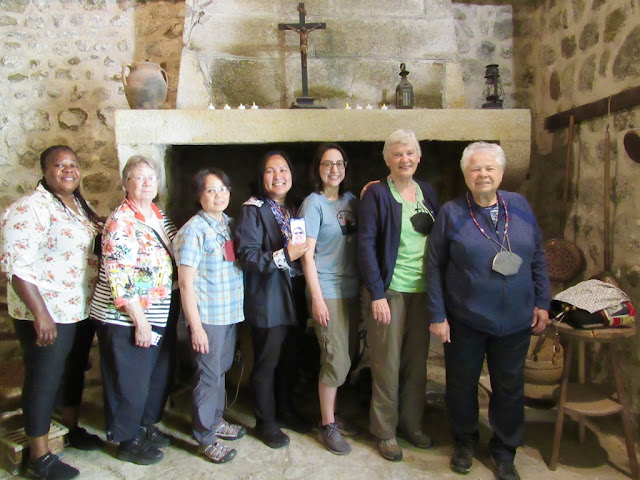 The sisters from Orange, California re-started their CSJ Heritage Pilgrimage since the Covid pandemic. Four sisters from Formation and their director, Sr. Kit Gray participated in the pilgrimage, which was led by Sr. Mary Beth Ingham and Sr. Jane Delisle.

During the two-week pilgrimage, the sisters visited several sites that are particular to the Sisters of St. Joseph: Annecy, Bas-en-Basset, Monistrol, Carcacassonne. They spent June 8-13 in Le Puy. 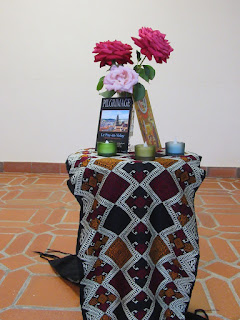 The sisters gathered around a small altar for prayer, input, and state of the heart with a different theme each day. 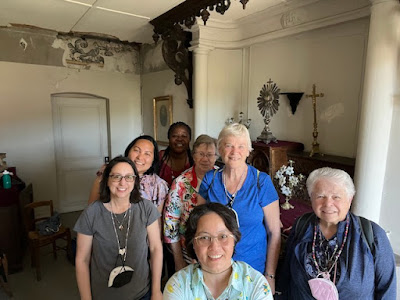 In this video below, Sr. Jane Delisle talks to Sr. Trish about St. Francis and the Église du Collège. Fr. Medaille visited Le Puy from time to time and also preached in the Jesuit-sponsored church. 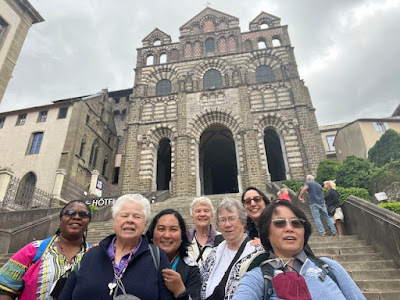 The sisters climbed the 134 steps to the Cathedral de Notre Dame and learned about its significance as a starting point of the Chemin de Compostelle pilgrimage (the Camino). Henri de Maupas served as bishop here when he encouraged Fr. Medaille to gather local women to serve the poor. 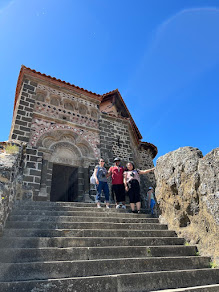 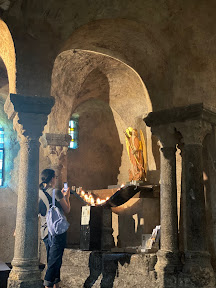 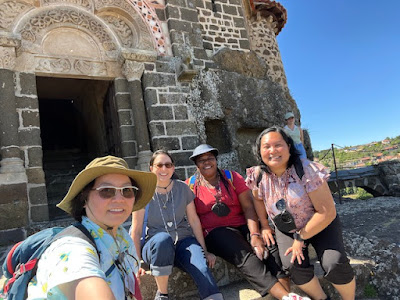 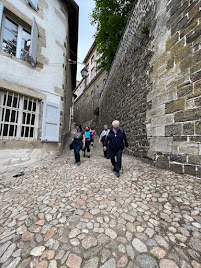 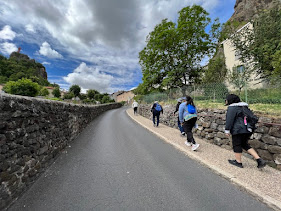 In 5 days of their stay in Le Puy, the sisters calculated that they had walked about 27 miles. 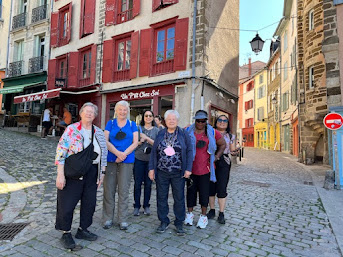 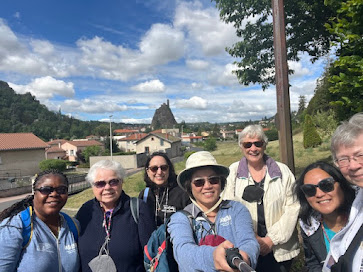 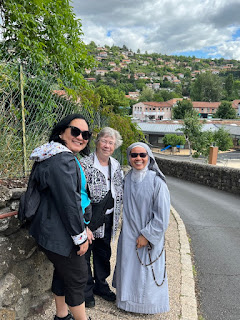 On the way to St. Michel, the sisters met Sr. Hannah of the Sisters of St. John. She recently arrived in Le Puy from her native country, the Philippines, to assume her new ministry at the Cathedral. 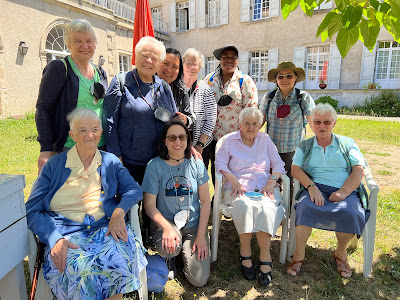 Before their stop at the Kitchen and the Scenography (Living History Centre), the sisters met some Le Puy sisters who live on the campus. 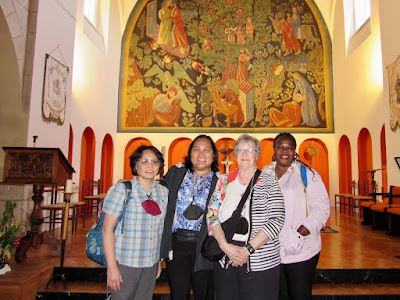 The sisters had time to take a look at the St. Joseph Basilica, which is the third puy mount in Le Puy. The basilica features the life of Joseph on the back wall of the sanctuary. Formation director Sr. Kit accompanied Sr. Trish, Sr. Grace, and Sr. Flo. 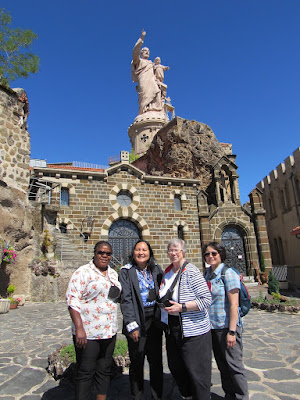 The sisters climbed the stairs of the mount to get closer to the giant statue of St. Joseph and to visit the incredible grotto chapel (below) that was formed out of the rock. 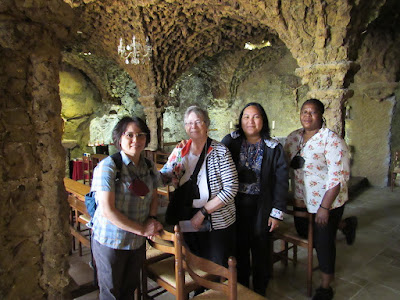 The cool evenings allowed the sisters to take walks, talk with each other--and pick cherries. The trees behind the Centre International are abundant with cherries waiting to be picked. However, the sisters couldn't resist eating some along the way. 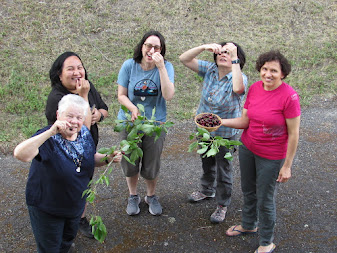 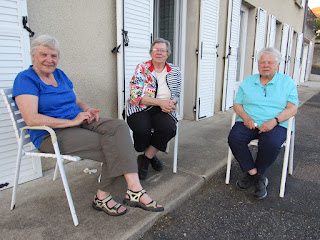 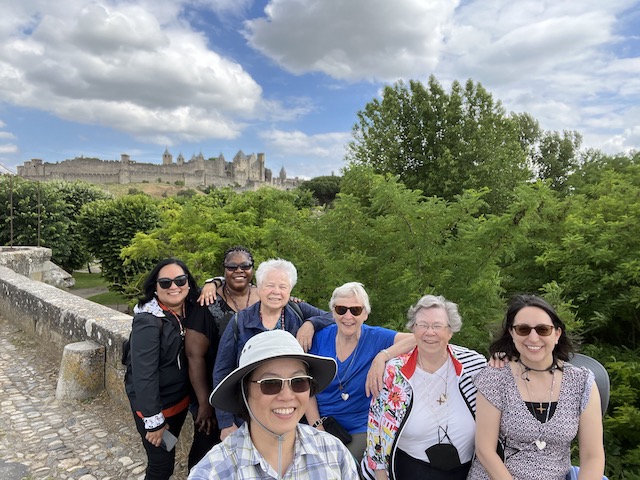 The sisters visited Carcassonne, the home town of Fr. Medaille. They visited the church where he was baptised. The walled city makes for a spectacular background. was born in Carcassonne, France on Oct. 6, 1610 and was educated at the Jesuit College there 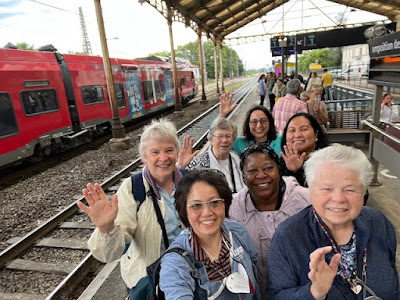 The sisters took planes, buses, and trains during their 2-week pilgrimage. Everything was an adventure as well as a spiritual journey to the heritage of the Sisters of St. Joseph. 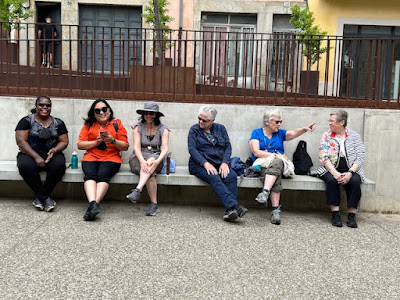 Many of these photos were taken by Trish. 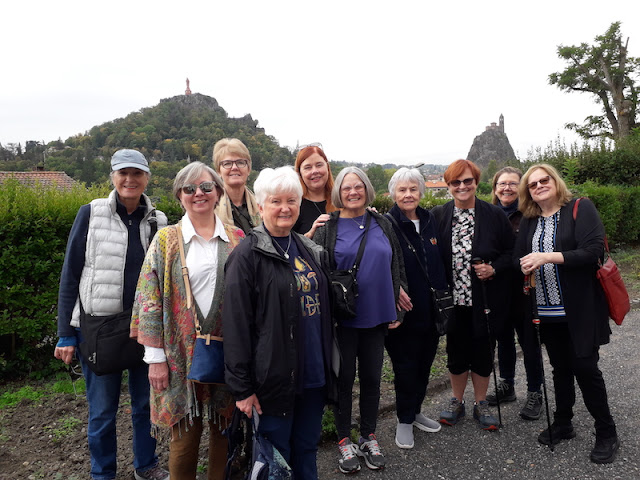